when you can spoof yourself onscreen.  Thanks to the brilliant minds at the Bold and the Beautiful:

Check out more clips from the EyeOnFashion youtube channel, by clicking HERE If you check it out, you can pick up more videos like THIS:

Thank you, gods of the ‘shirtless hunks of daytime’.   Who needs eggnog?

I don’t know how they did it.  BnB writers gave us a ton of characters who disliked Rick and had every reason in the world to want to see him taken down. He’s been handed everything on a silver platter and it’s never been enough for him. The more you give him the more he wants. WOW! It makes PERFECT sense that Rick would be the one who sets his family up for a fall and moves on to help his father’s worst enemy take his family’s company down.  We were misdirected when the real villain was under our noses the entire time.  If a single plot was enough to earn a show an Emmy, the Emmy clearly belongs to the Bold and the Beautiful.

It’s consistent with the show’s history and makes use of a plot point that many may have forgotten.  Rick betrayed his father the MINUTE he got back to town. He hid behind a pathological hatred for Ridge and Stephanie to fault them for the Forresters losing the company. Jackie and nick stole the Forrester Creations based on a lie Jackie concocted! Stephanie NEVER shoved Jackie over the banister in the Forrester home, she only defended herself against Jackie’s physical attack on her. The Forresters were faced with saving Stephanie from prison by selling the company, or kissing her good bye (frankly, I would have kissed her good bye).

Rick handed Nick a list of FC employees who would help him make a success of the company he stole (not that they were successful in saving FC from lousy management). He came back and pimped his mother. He came back and treated his grieving sister like a pawn. He came back and ignored his sister’s child’s death.

Rick is a real sociopath!  DE-FREAKIN-LICIOUS!

How much more could Eric have loved him? How much more could his parents have given him? Enough is never enough for our Rick, give him and hand and he’ll choke the life out of you and pick your pockets with it.  What a evil bastard.  What a diabolical plot.  Well done, BnB writers!  The best in daytime?  No, this plot holds it’s own no matter what genre you place it in.

I was torn between the above title and this one: “The Storyline We’re Still Waiting For”  (about Nick and Jackie Marone, that is).

Well played, BnB writers, well played!  I can’t imagine that there’s one Bridge Forrester fan out there who isn’t fuming right now, wondering if it’s wrong to want to a ficitional character to be castrated!  Nick Marone 0s certainly a deserving target, if it’s not.  The evidence, you ask?  If you’re not a BnB viewer, the man is talking about a one night stand he had with his wife’s aunt – one he’s been lying about since it happened:

How does the jerk wad follow that up?  With THIS (Thanks, TVMegasite, for the transcript):

Katie: I don’t care if it’s wrong. I can’t regret the fact that I’m having your baby.

Katie: You really mean that?

Nick: (Sighs) I’d be lying if I didn’t say this confused me at first. (Clears throat) you know, I–

Nick: It should have felt wrong to me, and it didn’T. And I should have feared all the complications that we now face, and I didn’T. I was wondering why. (Laughs) why? You know, when you were on that island sick, and I was there with you… (sighs) my prayer was that before you died, you’d know how I felt.

Can someone tell me how Katie, pimping a Bridget-Nick reunion to Nick, drinking scotch and putting a puzzle together, turned into a deep and abiding love between these two?  They’ve gone from a sibling-like relationship to soul mates in about two hours worth of scenes.  That’s moving incredibly fast, even for the BnB.  Hold on to your last meal, readers, you may lose it if you continue read on:

Nick: So now we’re there. And I hope that you can feel that I love you.

Katie: You haven’T. You haven’T. I-I think you just said that you love me, and I– I love you, too. You must know that. That’s why this baby is so precious, is so important to me, because–because it’s yours. It’s ours. It’s the one thing I have that we share, and– only we can’T.

Nick: But we have to. This baby’s not going away. You know that.

Katie: (Sighs) but what about everything else–

Katie: I hear what you’re saying, and I know it’s true, and to hear those words coming out of your mouth– they bring me so much joy. I never in my wildest dreams ever thought that I would hear you say those things to me. I feel like I’m dreaming. But I know I’m not. I know I’m gonna have to wake up. This is just all so confusing. I-I don’t know what I’m allowed to feel. I don’t know if I’m allowed to be happy or excited. Help me, nick. Help me. Because a part of me hates myself for this.

And then there’s this:

Katie: And she deserves all of you.

Nick: She deserves to have the best of me, and if I can’t give her that–

Katie: You’re happy with her. I know. I’ve seen you together.

Katie: (Sighs) this is just so complicated.

The reason it would be hard for Bridget to have the ‘best’ of Nick is that there is no ‘BEST” of Nick.  There’s bad… worse… and what a freakin’ waste of human DNA (even fictional DNA) 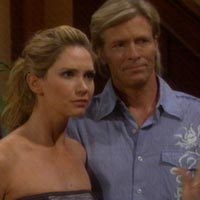 The writers are still skimming the surface with this guy.  All of his emotions are shallow. He wants to be Ridge Forrester and possess all Ridge has (including his family’s company, the woman he loves, his children).  He’s just met Katie, and suddenly he’s deeply in love with her, to the point of denying Bridget – a woman he’s known and ‘loved’ for years.  The mother of his first child.  He mourned his dead child (Nicole) – in his words, but never mentioned her while in bed with the dead child’s grandmother shortly after Nicole was buried.  He loved Taylor more than he’d loved before, or so he led her to believe, and was back to chasing Brooke and leading a double life when it was revealed that hers was the donor of the egg used to conceive his child with Taylor.

Easy to see how the man made it to the top of the Manwhore list.  When does it END!?!?!?

If the BnB ever returns to what made daytime great there has to be some focus on the way the Marone family uses sex as a way of life.  Jackie explained that ‘pride’ made her turn to prostitution to raise her child, instead of working or going on welfare.  If Jackie was a woman with no skills and without an education, that might have made sense.  There has to be more to it.   I’m not sure if the devil in high heels is Jackie, whose DNA flows through the pants-dropper’s veins, or if it’s about Nick spewing of the insta-love-and-destiny bullcrap as a way of excusing his actions.  SHE! did it.  SHE! made him fall in love – that’s why he continues to betray the women who’ve loved him and given him their full hearts.

Whatever it is this mother-son have in common, it’s hurtful and painful to the people around them.  They’ve spent more time justifying their sexually inappropriate behaviors (too numerous to name for non BnB viewers) than trying to understand them.  The superficiality is killing both characters, Nick more quickly than Jackie, obviously.

Sooner or later, writers will have to explain to fans what the point is of keeping Nick around.  Nick will surely drop trou for the next Logan-Forrester woman he spends five minutes alone with – it’s his nature.  What else is there for him to do?  The character has never fit in on canvas and every time the show was redirected (characters’ histories changed, couples’ histories changed, the show’s focus changed) to shoehorn him in, it resulted in a disaster in the ratings.

I’d only thought I lost my patience with this character, before.  I KNOW I have now.  He’s on an endless loop of one night stands, and impregnating the show’s cast.   There’s nothing left to see here, writers.  Nothing left to see.  <sigh>