Fine. I’ll admit it.  I LOVE:  Tori and Dean.  (Loved Spelling’s “So noTORIous” as well).  I was never a 90210 fan, and can’t say that I made it through a full episode in the entire time the show was on the air.  In fact, if you totaled every scene I’ve ever watched, it still wouldn’t get you to a full episode. It was while watching “T&D: Home Sweet Hollywood” that the question hit me.  Has NUKE become the daytime equivalent of ‘Donna Martin’?  What I  know of Donna was that she wanted to maintain her virginity until she was married.  Was she successful in keeping her pledge to maintain her virginity?  I have no idea, maybe a 90210 fan can email and let me know. 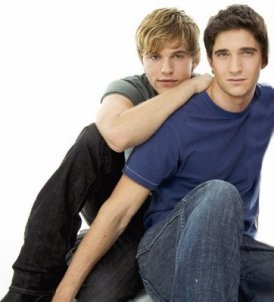 While I posited in an earlier blog (ATWT writers vs. THEMSELVES) that the writers are treating Nuke as a mix between a throwback to old-fashioned courtship and a slow build into a ‘controversial’ relationship (as with Jessica and Duncan before them), there is a third possibility.  If Nuke has become the daytime equivalent of “Donna Martin’, they have also become the show’s moral center – and I’ll leave it to you to decide if it was intentionally or unintentionally brilliant on the writers’ part.  Nuke is the one couple that seems to have realized that there are lines which should never be crossed – like, say, pursuing your spouse’s best friend for the sake of a sexual relationship.  At least they haven’t crossed that line YET, not even with one another.

So if the Donna Martin comparison holds, are the writers waiting for the wedding night for Nuke to finally get together?  Oh cruel irony.

Here’s another cruel irony.  While daytime has heavily courted, and failed to attract, the ever elusive ‘younger viewer’, it’s failed to pay attention to the cultural shift that’s taken place in the lives of ‘younger viewers’.  Shows like MTV’s “Next”, “Parental Control”, “Date My Mom”, and “Engaged and Underage” (among others) don’t have the skittish and dichotomized view of sexuality that daytime writers do.  The parents of straight and gay youth help find someone who will love and respect their children.  Youthful viewers see images of diversity (racial, sexual, religious) that daytime writers have yet to offer them.  Everyone is treated as ‘the same’.   Imagine that.

ATWT writers are seemingly between a rock and a hard place. They’ve chosen what is still an “unconventional” storyline in a far too conventional medium.  Actors who’ve been involved in  unconventional storylines in the past  (namely, cross cultural love stories) have spoken openly about the audience’s initially negative reactions to those storylines, much of which has dissipated. The question is whether ATWT writers are willing to fully commit to the Nuke storyline or if they’re going to continue to stall it..

While ATWT’s writers have taken gay characters farther than any network show in daytime history, they still haven’t taken the couple as far as most other couples their age.  I have a hard time believing that fans will find a romantic love story between these two young men more controversial than some of it’s more recent storylines (mentioned below).

1 – You’re never going to attract younger viewers who are more culturally fluid and savvy than you give them credit for.  What you’re doing is groundbreaking work for daytime.  It’s old news for them.  My own son is a mid 20-something who has friends who are from all walks of life, of all religious backgrounds, differ in their political philosophies, and whose sexual orientations are never even a question because no one cares.  (BTW, I’ve received pretty negative feedback about referring to Luke and Noah as ‘young’ in the above mentioned blog… that depends of your perspective.  They’re younger than my kid – and yes, I still think of HIM as a ‘kid’.  C’mon folks).

2 – Old veteran viewer beeyotches like me are FAR more open-minded than you give us credit for.  We’re not bigoted control freaks who are afraid of young people in love. Well, we are afraid of Parker and Liberty, who  are more ‘in lust’ than love, and given how hormonal and reckless they are, uh, YIKES!

The ATWT writers have  painstakingly shown us that Noah and Luke are kids with better morals than either set of parents who spawned and raised them – but where does that leave the couple?  Will they remain the male equivalents of The-virginal-Donna-Martin?   Will writers allow Nuke to become a full fledged couple and create network daytime’s first gay love scenes?  Will NUKE stay together long enough to create a family of their own?  If time tells all, she’s pretty quiet on this score.

If daytime wants to pull itself into the future it’s time to let go of the squeamishness about race and sexuality.  (Read PGPClassic’s though provoking, July 15th blog entry,  “The Color of Race”).  Come on, daytime, we’re all bigger than that.

Last, but not least: I friggin’ love Brad Snyder for stepping up to the ‘Real Man’ plate, and joining the moral center spotlight with NUKE this week. Don’t worry.  I get it.  This isn’t “Little House on the Prairie”, but I can’t help loving the balance the show’s provided with Brad becoming an active parent.  We have the drug addicted porn star turned nurse, Emily the former prostitute dating her son’s brother, some sort of drug poisoning that has everyone stripping to the birthday suit, Meg seeing the ghost of a murdered girl, Lily revenge dating to get back at her cheating husband, Vienna leaving Henry, Bonnie representing an obviously guilty criminal, and Brad the good father.  I needed the respite from the endless parade of muck!  It’s been my only warm fuzzy of this past week (that and watching Janet flip her hypocritical bean about being ‘lied to’ as Liberty’s parent).