Are we SURE Putin is a Trump pal?  Unlike Donald Trump, I firmly believe all 17 U.S. intelligence agencies that state in the affirmative that Putin interfered in the U.S. election with the goal of helping Trump win.  Unlike Donald Trump, I also believe the same agencies that agree that Putin is not, and will not be, a U.S. ally. as he continues to work against U.S. interests in the world  There are times when I am not even sure he is a #Trump ally.  If Putin is the master tactician he is reported to be, you have to wonder about his offer to make available the recordings made in the Oval Office during the visit with Lavrov and Kislyak.  The timing is especially curious since he has admitted to declassifying sensitive information.  The effect of this offer is even more interesting, to me.   It’s a little sloppy, don’t you think?  According to ABCNews

Russia’s state-run TASS agency confirmed that Putin offered to release a transcript of the talks between Trump and the Russian envoy during their May 10 meeting at the White House if members of Congress ask.

The tapes would be unedited, I’m sure.  What is Russian for “wink”?  There are bigger issues than whether or not the tapes are unedited.  The offer, on the surface, appears to be an attempt to help Trump,  but does it really do that?  There are three critical concerns that should be raised by this offer:

1 – The offer is a reminder that Putin pulled Trump’s strings and as a result the White House complied with Putin’s request and disallowed the U.S. press to be present.  That left state-run Russian media to record. Was TASS granted full permission to record?  Who granted that permission?  Who else knew this was happening?  Were there dissenting voices? What forms of journalism were approved? Print? Audio? Video? To date it has appeared that print photography was the only approved media access.  Surprise?

2 – Trump was shamefully unaware of the gravity of meeting in front of the Russian press without the protection of the American press.  Were there other protocols that may have been ignored.  Is it routine to check equipment before and after visits?  If so, was this done?  Who physically carried TASS media equipment?  DId TASS carry and record as they moved through the White House?  Would they have been able to record if the US media was present?  Trump is far less friendly with American media than he is with Russian media.  If the U.S. media was present, I would venture a guess to say that no one would have been granted permission to record the sessions – again, assuming TASS was granted permission and didn’t simply record without the administration’s knowledge.

Imagine how different the outcome would have been if U.S. media would have been present.  Would an American journalist have detected the various forms of information gathering taking place in the Oval Office?

3 – This recording means that instead of the strategic meeting on terrorism the White House and surrogates claimed it to be, Trump spoke openly of material so sensitive that members of Congress and other government employees, including intelligence offers, did not have access to it.  Why would a strategic meeting about terrorism take place under the watchful eyes and listening ears of TASS?  Even if you buy Trump’s argument that he declassified the information to support his (not our) allies, why would it take place in such an open forum?  He would never hold a strategic meeting in front of the American meeting, for good reason.  Putin’s offer has made it clear that this was simple carelessness on #Trump’s part.  Nothing less and, hopefully, nothing more.

With friends like Putin… as the saying goes.  Woe is Trump when Putin decides he is expendable.  What other recordings are waiting to be released? 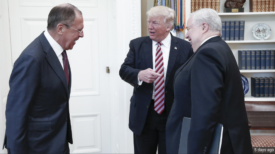 Conservatives have spent much of the last day attacking the media for daring to report the Washington Post’s  breaking news that Donald J. Trump revealed sensitive information to the Russian government via his meeting with Russian diplomats Lavrov and Kislyak.  At the time of that meeting, given #Putin’s directive that #Trump was not to include the American media, most of us probably worried that the worst that would happen is that the true purpose of the sensitive equipment the Russian media brought into the oval office would be revealed – to our detriment.  That now seems like such a small, innocent, useless, concern.  Putin didn’t need pictures. He only needed the man whose election he aided.
While conservatives shook their fists in fury at the “liberal Trump-hating media” for attacking him, most of us realized the implications of the Washington Post’s work. We quickly realized that Trump had once again put the safety of the U.S., and U.S. assets, at risk.  On cue,  he sent surrogates to lie and cover his trail, this time in the guise of the respected National Security Adviser, General H.R. McMasters.  Cognizant listeners knew that this was yet another in a long string of lies, despite our respect for McMasters.  We are hard pressed to believe anything that comes from the #Trump White House.  We are also hard pressed to believe that his surrogates are unwitting liars, given the pattern.
Trump falters, his surrogates lie, the truth comes out (often from Trump himself, as he undercuts his original message). The man who can’t admit fault will never keep a lie quiet because it is a tacit agreement that he has made a significant error, one from which he has to hide. He will never do that and this time is no different.  While McMasters read a non-denial denial meant to protect the Trump from his own recklessness, Trump followed up McMaster’s comments with the following tweets:

You might want to note that Kislyak wasn’t listed as part of the “openly scheduled meeting” nor was his name included in the official summary of the meeting, though the Russian media images show him there.

Then came the standard attempt to deflect blame and point the media, and an all too compliant Republican congress and Republican voters, in a different direction:

The LEAK is not the problem.  The recklessness of a man who ran for office, seemingly, with the intent on destroying President Obama’s legacy even if it hurt the nation, IS the problem. Trump was never ready for this job.  He has only been able to talk about the legacy he wants to destroy but almost no movement in the direction of the one he wants to build.  He has been able to keep the media (with the exception of the Washington Post) pointed in the wrong direction for nearly two years as he continues to make increasingly dangerous errors.
As I type this, I am listening to a preview of Anderson Cooper’s interview with Sally Yates.  He is asking her about Trump’s allegations that she leaked sensitive information to the press.  The failure of the mainstream press to do its job continues –  most especially by ignoring what are obvious lies from this administration. Investigate the lies? SURE.  Stop airing them as if they have credibility worthy of open denial.
To the media that continues to indulge this president, to the Republican congress and voters, to the devoted Trump supporters who continue to hang on to your belief that things will get better if Trump is simply given more time:   YOU were warned.  You were warned that Trump has NO IDEA what his job is and what it means. He told you lies you wanted to hear and you swallowed them, gladly.   His lies nourished fears and petty grievances but they also did something else.  Those lies told us exactly who this man is.  The focus on grievances outweighed the focus on the gravitas he lacked, for far too many voters.  Everything he has done wrong since in office was telegraphed through the primary and the general election.  The press, which has lost its curiosity about the 22 million missing Bush emails, focused on 33K Clinton emails and an unhacked server.  Voters and Republican politicians who called Trump’s impulsivity and unpredictability a sign that he would keep our enemies guessing now realize, I hope, that those traits are life-threatening and highly predictable for our enemies.  Putin knew EXACTLY what was doing to send to flattering handlers to meet with Trump.

To the media that failed to do its job during the primaries and general election and to Trump voters, that he put YOUR family at risk is on you. That you helped him put MY family at risk is on me. I am going to help register every person I can. I am going to donate to every vulnerable R seat I can. I am going to remind everyone I know and people I DON’T KNOW what a disaster the Republican party is.
Enough with party before patriotism. ENOUGH with nursing petty grievances instead of protecting our Democracy.  If the media and Republican voters can’t get it together for the sake of this nation, don’t worry, the Democratic party will protect you from yourselves and this nation against her enemies. We always have.