I feel dirty defending the writers of the BnB, believe me, hookers feel cleaner than I do, but here goes: The Forrester sibling storyline (the Donna hate?) makes SENSE.  Their attempt to get rid of her MAKES SENSE.  So little else about the show makes sense that when a storyline finally does, it’s like a needle in a haystack.  What makes sense about it?

–Jared warned them that they were the laughing stock of the industry.

— The FC sales have fallen significantly.

— FC customers have told them that their new line is trashy and not worth buying.

What is it about Eric in particular the ‘sibs’ should be concerned about?

1 – That Eric has a habit of forgetting that the company didn’t rise to the top of the fashion industry on its own, that his children’s lives and legacies are on the line, too.  He’s not throwing only his legacy away just to get naked, he’s throwing away every summer his children worked for the company, nearly all of their adult work experiences, every dream they’ve ever had about their future.  He’s screwing around, literally, with their pasts, their present, their futures, and typical Eric, he’s focused only on his and his young bride’s needs.

2 – That Eric has already thrown the company away once before for the sake of great sex with a younger woman.  He may have forgotten, but his children remember.  He neglected to have Brooke sign a simple waiver and it cost them controlling interests in the company.

Was that the low point?  No, of course not.  We know that Eric was so smitten with his Brooke that he was willing to deprive his chilren and ex-wife the right to reclaim their legacy by hiding the fact that the company wasn’t HIS to lose.  Stephanie legally held controlling interest of the company and Eric stayed silent.  He followed up that act of betrayal by praising Brooke, and rightfully so – she worked hard for FC, for her stewardship of the company and let his children eat crow.

A high point for those of us who were Brooke fans, but still a low for Eric.  If he was YOUR old man, wouldn’t you want to have some sort of say over what he did with the family company?  They’ve given up asking Eric to leave Donna. They’re only asking that given his propensity to go a little ‘third eye blind’ that he leave their company alone.

I think the writers are dead on with this one. 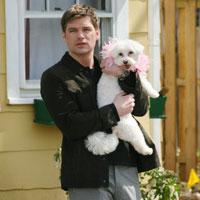 Guiding Light –  The new format leaves me cold.  The show now feels like some surreal version of a bad reality show.  Imagine standing next to two people whose conversations include statements like, “You mean she had herself artificially inseminated just to trap Billy Lewis into marriage?”  It sounds just as odd when GL characters say it.  The glory days of daytime were about glamour and fantasy.  The ‘reality’ version of GL steals that away from the show.  Now the characters just seem like whacked out wankers who are divorced from reality and sadly think they’re part of a campy soap.

The Bold and The Beautiful – Anyone named Logan.  Too much too soon?  Absolutely.  The problem is that only one face is familiar even if the names are the same.  Even worse is that the return for each Logan has been carelessly contrived.  Beth Logan’s stroke?  She’s lost a son to suicide, as he killed himself to ‘give’ his heart to the sister he shot.  Her husband accepted a 5 million dollar bribe to make her daughter believe that he was dying of cancer.  Her daughter and granddaughter have had children with the same man and are praising him as ‘goodness and light’ (and he’s now interested in another of her daughters).  Her first lover has married her oldest daughter and had children with her, and is now married to another daughter.  She’s concerned that her stroke would be too much for HER CHILDREN to bear?   She should be avoiding them for all sorts of reasons that would be considered rational and understandable by almost any breathing life form.  This storyline makes them all look just a tad bit off center.

The writers took what fans loved about the original Logans, that they were halfway normal and decent people compared to the Forresters, and trashed it to hell.  They’re still higher on the evolutionary chain than the Forresters, but not by much.  The writers made sure of that.

All My Children – anything.  There’s not one storyline or character I care about right now. (Ok, I do want to see more Angie and Jesse, but I just can’t wade through the bull crap to get to them).

General Hospital – See AMC.  Kristen Storms has finally found her groove as wicked Maxie, but I’d have to watch too much garbage to catch Maxie’s 5 minutes of airtime.

Days of Our Lives – John Black offers us a new ‘forehead of thought’ (DOOLs vets get that reference, I’m sure).  Directors, writers, producers, take control, NOW.  Between the wrinkle and raised brow and the ‘dark knight/chippendale dancer’ whisper, I’m laughing AT, not with.  John Black is now a caricature of his former self.  You usually have to recast to get that level of character shift.  Add the new ‘Frankie the Genius’  and his genius father and this show is one step away from anime- with subtitles.

1- I wouldn’t have such a hard time buying him as a genius if he wasn’t dating his niece, and

2 -I’d like to extend my apologies to Anime fans.  The writing is clearly better in that genre than in daytime.

Exhibit A showing the general suckiness of DOOL:  um, because violence against women is so cool?  Because the writers know what fans tune in for?  Oh, sure, the clip is old, but it was such a clear indication THEN of what was to come, just a reminder:

The begging, the pleading, the being pushed around… that John, what a ‘sexy’ assassin. I totally bought it, didn’t you?:

As for the Dimeras, namely EJ?  Pfffft.  How can such a hot actor be stuck with such an asshat role?  The writing for the character borders on insanity.  I’m reserving the right to change my mind if EJ ends up with Nicole and becomes halfway human – I can tolerate them, they’re birds of a feather.  I was pretty disgusted that the writers pushed the Ejami storyline for so long, knowing how many fans were turned off by that relationship after EJ’s extortion sex with Sami.  Romantic?  Sorta’ like that, only not.

The Young and The Restless – Gloria.  Wait, let me take that back!  There’s no part of me that wishes I could care about this character.  How long are the writers going to drag out the poisoning storyline?  The only mistake they could make, that would be even bigger than trying to make her Gloria a heroine in the first place, is having us find out that she was wrong – that her actions didn’t cause that poor woman’s death.  Don’t do it, PTB, don’t throw away your last bit of credibility on this character. Don’t absolve her of her actions after everything else she’s done.

As The World Turns – Sophie, Emily, and any other demented damsel in a distress of her own making.  When it comes to daytime crazy, these women have big shoes to fill, and so far they’re slipping size 6 feet in to size 0 shoes!  Compare them to characters like GL’s Sonny/Solita or Annie Dutton.   Annie carried a dead child in her womb for weeks waiitng for the perfect opportunity to set up her husband’s ex wife in order to send her to jail and keep her from interferring in their lives.  Even after she was found out, she pretended to be the ex’s long lost sister to save herself from being sent to prison.  Damn I miss Annie.  As for Sonny/Solita, I still get chills when I see portrayer, Michelle Forbes.

One Life to Live – Jared and Natalie, Cole and Starr, Todd and Marty. No MAS!  Outside of that?  This show is as close to soapy perfection as any soap ever was.  Two words: GO TESS!  Two more:  KICK ASS!  Ok, ok, four more:   THEY’VE GOT IT COMING!